If that population segment is shrinking, it stands to reason that the “fair share” of taxes from millionaires and billionaires is going to shrink too. Looks Like Wile E. Obama and the ACME Economic Destruction Co. are going to have to re-think their strategy. Or, maybe they already have, since they have lowered the threshold for “wealthy” down to $250,000 in income.

America’s millionaire population declined last year for the first time since the financial crisis, according to a new report.

The population of U.S. millionaire households (households with investible assets of $1 million or more) fell to 5,134,000 from 5,263,000 in 2011, according to The Boston Consulting Group’s Global Wealth study.

The ultra-rich were the largest losers in dollar terms. Households in North America with investible assets of more than $100 million saw their wealth decline 2.4 percent. Their population declined slightly to 2,928 from 2,989.

These will add a little spice to your humdrum garden gnome collection. From Zombie Gnomes, via DesignTAXI

The hits just keep on comin’. The Bureau of Economic Analysis released a revised estimate for Q1 GDP (down) and a preliminary estimate for Q1 Corporate Profits (down from Q4). Let me guess: unexpected? 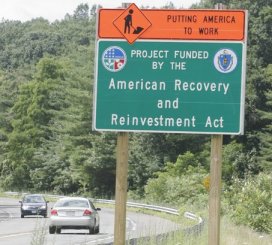 Real gross domestic product — the output of goods and services produced by labor and property located in the United States — increased at an annual rate of 1.9 percent in the first quarter of 2012 (that is, from the fourth quarter to the first quarter), according to the “second” estimate released by the Bureau of Economic Analysis. In the fourth quarter of 2011, real GDP increased 3.0 percent. The GDP estimate released today is based on more complete source data than were available for the “advance” estimate issued last month. In the advance estimate, the increase in real GDP was 2.2 percent (see “Revisions” on page 3).

I’m guessing in the next couple of days, Paul Krugman will write an editorial in the NYT calling for a new, bigger stimulus to correct the “mistake” made when the (not nearly large enough, according to him) first $800B didn’t work. Sigh.

Are you kidding me? Doesn’t this guy have anything else to do except think of ways to try and control people’s behavior? I love that fruit juices, milkshakes, and alcohol (no calories there, right?) are exempted. 15.5 oz cups, anyone?

Mayor Michael Bloomberg is on the verge of taking serious aim at sugary drinks, as he wants to ban such beverages larger than 16 fluid ounces from nearly all dining establishments in the city.

The city’s proposed ban on sugary drinks would apply to service in nearly all restaurants, movie theaters and street food carts and it is part of a Health Department aim to reduce obesity.

The ban, which if approved would be the first of its kind in the nation, would take affect in March 2013.

Diet sodas, fruit juices, dairy-based beverages like milkshakes and alcohol would be exempt from the ban and it would not affect sales in supermarkets or bodegas.

However, corner stores and all other establishments that receive a letter grade on food service from the Health Department would have to follow the ban.

The Health Department is not seeking City Council approval to move forward with this plan, but the city’s Board of Health would have to sign off on it, something that is considered a foregone conclusion.

I wish here were right, but that’s a highly unlikely scenario. I love Schultz’s (the left’s) assessment of Scott Walker in Wisconsin. They don’t know it yet, but guys like Walker are saving idiots like Schultz and his ilk from completely destroying Wisconsin, and the rest of the country. If they’re hanging their hopes on a win in the Wisconsin recall election, there’s a big load of disappointment coming (transcript of audio from Schultz’s show, via Newsbusters).

I would venture to say that most of the people that listen to the Ed Schultz radio show are good lefties. Or maybe they just like to hear something different every now and then because we’re just inundated with right-wing crap all over the radio dial in America, whatever reason. I guess I’m talking to lefties right now. Not that the rest of you can’t listen and we love it when you do.

So that’s why this is so important. They’re trying to make it so Barack Obama doesn’t get re-elected and no Democrat ever will be elected into the White House.