Adjusted for inflation, our government has spent five times more in 50 years “fighting poverty” than we’ve spend on 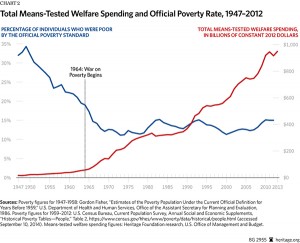 every war since the American Revolution. Yet, the number of people classified as “poor” has not changed much in 40 years. How can this be? The percentage of people considered poor has remained pretty static for a long time, yet spending grows at an atmospheric rate. Could it be there are too many programs? Too many agencies? Too many government functionaries collecting a paycheck to do the same thing as someone in some other department?

Over 100 million people, about one third of the U.S. population, received aid from at least one welfare program at an average cost of $9,000 per recipient in 2013. If converted into cash, current means-tested spending is five times the amount needed to eliminate all poverty in the U.S. But today the Census will almost certainly proclaim that around 14 percent of Americans are still poor. The present poverty rate is almost exactly the same as it was in 1967 a few years after the War on Poverty started. Census data actually shows that poverty has gotten worse over the last 40 years.

How is this possible? How can the taxpayers spend $22 trillion on welfare while poverty gets worse? The typical family that Census identifies as poor has air conditioning, cable or satellite TV, and a computer in its home.The answer is it isn’t possible.  Census counts a family as poor if its income falls below specified thresholds. But in counting family “income,” Census ignores nearly the entire $943 billion welfare state.For most Americans, the word “poverty” means significant material deprivation, an inability to provide a family with adequate nutritious food, reasonable shelter and clothing. But only a small portion of the more than 40 million people labelled as poor by Census fit that description.

The media frequently associate the idea of poverty with being homeless. But less than two percent of the poor are homeless.  Only one in ten live in mobile homes. The typical house or apartment of the poor is in good repair and uncrowded; it is actually larger than the average dwelling of non-poor French, Germans or English. According to government surveys, the typical family that Census identifies as poor has air conditioning, cable or satellite TV, and a computer in his home. Forty percent have a wide screen HDTV and another 40 percent have internet access. Three quarters of the poor own a car and roughly a third have two or more cars. These numbers are not the result of the current bad economy pushing middle class families into poverty; instead, they reflect a steady improvement in living conditions among the poor for many decades. 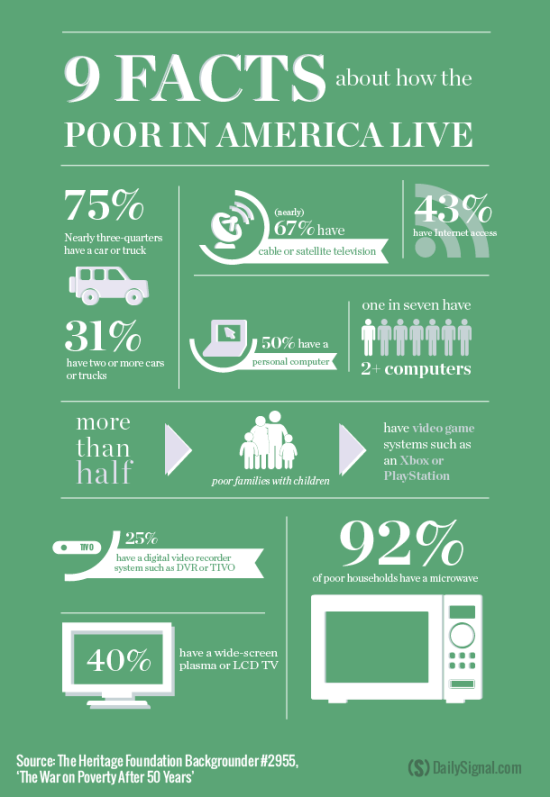 via The War on Poverty Has Been a Colossal Flop.

This particular story is even sadder for me, because it happened right here in the Old Dominion, just about two hours west of Richmond. I had heard about this story at the end of last week, but this particular site puts an interesting spin on it: while this kid needs a doctor’s note to have lip balm applied by the school nurse, in 26 states, she wouldn’t even need parental permission to get an abortion. World gone mad. 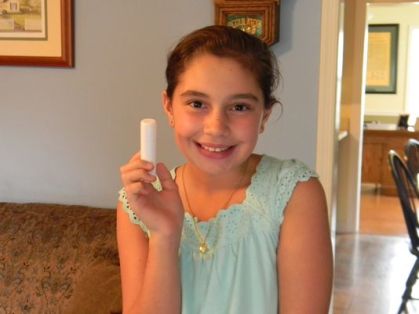 A news story has been making the rounds about a ridiculous elementary school regulation against students’ use of lip balm. A fifth-grader named Grace Karaffa requested some Chapstick while on the playground and was denied.

Eleven year-old Grace started a petition to allow Stuarts Draft Elementary School students to use the product and gained 236 signatures before testifying to the school board.

She explained, “I was told I couldn’t use it. Then later that day, they started to bleed so I asked for Chapstick again and I was told that it was against the school policy for elementary kids to have Chapstick.”

This may seem like a somewhat silly story about bureaucracy gone too far. However, it is outrageous and infuriating when you consider that a child may need a physician’s note to apply Chapstick — but, in 26 states and Washington, D.C., teenagers and pre-teens don’t even need parental permission to obtain an abortion.

An 11 year-old girl has to apply to her school district’s board to be able to use Chapstick on her chapped lips. Yet in some states, if an 11 year old girl wants a life-altering and potentially life-threatening surgical procedure, nobody has to know. In many other states, parents, guardians or even just a sibling or “mental health professional,” need only be informed of this child’s decision.

via Doctor’s Note Required to Use Chapstick in School, Yet Abortions Available to Minors | LifeNews.com.

Lovely. The president of the NYC teacher union thinks you’re a conspiracy theorist if you don’t approve of the Common Core standards, and he’s ready to punch you in the face for it. What’s sad is the teachers in attendance at this speech applauded.

Are you skeptical that the Common Core education standards will significantly improve school outcomes, given their massive cost and cumbersome standardized testing requirements? Why, you must be some kind of insane conspiracy theorist!Michael Mulgrew, president of New York City’s United Federation of Teachers, remarked at a convention last month that only crazy people could possibly oppose Common Core. His comments were not widely publicized until late last week. “I’ve heard the stories about how Eli Broad, Bill Gates, Joel Klein, and a flying saucer full of Martians designed these things to brainwash us all,” he said, according to The New York Daily News.

It’s a cheap shot, although it’s nothing compared to what he said next, regarding activists who are trying to pressure legislatures to move away from Common Core:

“So I stand here in support for [Common Core] for one simple reason. If someone takes something from me, I’m going to grab it right back out of their cold, twisted, sick hand, and say it is mine. You don’t take what is mine. And I’m going to punch you in the face and push you in the dirt.”

It’s nice to passionate about things, but this is -I don’t know- maybe going too far? Common Core has a lot of issues, and seems doomed to fail. What rationale could Mulgrew have for defending it so vociferously?

via Teachers Union Prez: ‘I’m Going to Punch You in the Face and Push You in the Dirt’ – Hit & Run : Reason.com.

New regulations will restrict bake sales to 30 school days per year. Best line: “If I thought I could generate revenue selling carrot sticks, I could tear it up.

In order to comply with the Michelle Obama-inspired regulations, Tennessee schools will only be allowed to have bake sales 30 days per school year.State Education Commissioner Kevin Huffman said it was “quite remarkable” that food fundraisers would be regulated by how many days they can be held, noting that this will prevent high school sports teams from holding weekly food fundraisers, according to The Tennessean.

Others were more direct in their criticism. “It’s unbelievable to me the amount of guidelines that are there,” state Board of Education Chairman Fielding Rolston said, according to the newspaper. “If somebody wants to object to federal intrusion in what’s going on in schools, I think this would be an ideal place to target their objections,” Rolston said.

School leaders detail how the top-down regulations will have serious consequences for student and teacher activities.“That means if the Spanish club sells sausage biscuits one morning, that’s one day,” David Sevier, deputy executive director of the State Board of Education, told the paper. “If there’s a schoolwide event where all the teachers cook hamburgers for the seniors, then that’s a day. If there’s a day when the parents do pizza for the entire school, that’s a day.“If it’s 10 kids or 1,000 kids, it’s still counting as one of those events.”Sevier ridiculed the regulations, saying, “If I thought I could generate revenue selling carrot sticks, I could tear it up.”

Warren Meyer at Coyote Blog provides an interesting way to evaluate claims by many that the Supreme Court’s Hobby Lobby decision is “denying” birth control to women.

I don’t think anyone would say:

Yet half the country seems to be saying

His analysis is indeed a reflection of the mind of most responsible people: they wouldn’t think of saying they’ve been denied something because somebody else wouldn’t pay for it. However, I think there are a lot of people in this country now (for various reasons) that would say these things. They’ve been inculcated with some misplaced idea of “rights” that have nothing to do with natural rights (the ones that can’t be granted by men, and can’t be taken away without your consent).

via Coyote Blog | Dispatches from District 48.